It’s that time of year again when VC hunkers down into the LA Asian Pacific Film Festival planning madness!  This year is special as it’s our 30th anniversary. That’s right, a whole thirty years of featuring films about and by Asian Americans! From shorts to documentaries and narrative features, we’ve screened to many audiences. For this year’s special anniversary, we’ve compiled a timeline and images from the past thirty years, featuring events, guests, and even our catalog covers.  Please check it out.

If you’re in town, please consider attending the festival!  The festival’s gala night opens with “To Be Takei,” a documentary about George Takei that features archival footage from VC’s Commission on Wartime Relocation and Internment of Civilians Hearings Collection, where Takei testified about his internment experiences during World War II.  We’re excited to share this film with our audiences, and hope to see you there!

October is American Archives Month.  This post is one of a series of blog posts that Visual Communications will present of Asian Pacific Americans who have made their mark on their communities and history.

Back in 1981, VC and NCRR, then known as the National Coalition for Redress and Reparations, worked very closely together to record the events and activities of the campaign to win redress for Japanese Americans incarcerated in camps during World War II.  People like Duane Kubo and Steve Tatsukawa, two of the early staff of VC, had participated in the fight against redevelopment in Little Tokyo and helped to link the work of VC to what was happening in the community.  As active members of NCRR as well, they helped to gather VC volunteers to film all three days and one evening of the hearings conducted by the Commission on Wartime Relocation and Internment of Civilians (CWRIC) in August of 1981.  And we are so glad that this watershed moment in our history has been preserved, only one of maybe three sets of hearings that were videotaped.

President Jimmy Carter set up the CWRIC with the task of reviewing the “facts and circumstances surrounding Executive Order 9066 and “the impact on American citizens and permanent resident aliens”, “review the directives of the United States military forces requiring the relocation” and “to recommend appropriate remedies.”  With that in mind, the Commission held hearings in ten locations, including Los Angeles.

Fortunately, LA had both the grassroots organizers and the film experts to mobilize people to testify and attend the hearings as well as to push for larger facilities and translation for the Japanese speaking Issei (first generation Japanese American).  Setting up the equipment and filming of the three days and one evening of testimonies was not as simple as it is today, but the videographers were able to capture the emotion and anger of the Nisei (second generation Japanese Americans) who spoke for the first time about a brother being shot in the back at Manzanar, losing a baby in childbirth and how stunned they felt at being treated as aliens and not as Americans.  The boos shouted at Senator S.I. Hayakawa who called the camps a “three year vacation” and the shouts of “get her out” directed at Lillian Baker who attempted to grab the testimony out of the hands of a 442 veteran are all recorded.

In the late 1990s, VC and NCRR realized that these tape recordings, now over ten years old, needed to be preserved and shared.  With a grant from the Civil Liberties Public Education Fund (CLPEF), a committee of volunteers from NCRR under the guidance of John Esaki (then of VC), reviewed all 161 testimonies to summarize and index into a Viewer’s Companion.  The thirteen VHS tapes were packaged and made available to institutions which could now have the tapes in their libraries for individuals who could find testifiers or research specific topics more easily.

Fast forward another ten years and these VHS tapes now needed to be further preserved.  With another grant from the California Civil Liberty Public Education Program, the Japanese American Community Services and the Aratani Foundation, VC’s Jeff Liu worked to digitize the tapes, add subtitles for the Japanese testimonies and enhance each individual DVD with additional visuals and information so that each could stand alone.

Why are these important?  Recently, NCRR members used the testimonies from the hearings at a workshop moderated by Professor Lane Hirabayashi of UCLA at the Japanese American National Museum conference in Seattle.  We knew that many people had never seen the tapes and may not have even known about the hearings.  Some of us were lucky enough to be at the hearings and to even testify.  My mother had passed away a few months before the hearings and I had a newborn daughter, so the significance of this event hit me hard and I felt the need to share my mother’s experience.  Her father had been picked up by the FBI, leaving her mother with a family of ten kids to deal with the farm in Santa Maria and the eventual incarceration at Gila River, Arizona.

We thought this was a good way to share how the hearings allowed our community to speak out, many for the first time, about the injustice and how important that was to building a movement for redress in the 1980s.  What was really surprising and enlightening was the reaction of the audience.  Most were initially quiet until the very end after seeing and hearing the experiences of the Nisei and Issei on the screen.  When one woman spoke about how her husband, who was sitting next to her, never shared his experiences with his children, she opened a floodgate for others who wanted to talk about how these stories impacted them.  Two sisters, who grew up in the Midwest, became very emotional about their father who also never told them about the camps.  One young Sansei (third generation Japanese American) father expressed how his father’s pain during the incarceration had been passed on to him and he did not want to pass that onto his son.  He felt that hearing and feeling that history would help him understand his own parents and himself.  We realized that these testimonies continue to have relevance for many people who were not part of the redress campaign or the camps.

Where are we at now?  As educators and former teachers, we still conduct workshops on a film called Stand Up for Justice about Ralph Lazo, and realize that testimonies are valuable resource for teachers and students.  Sadly, there are not many of the older Nisei who can speak to classes directly anymore and these DVD are a good way to bring those first hand stories and voices into the classroom.  We are seeking funds to make the DVDs more useable by adding a menu so that viewers can more easily find specific testimonies. For teachers, we have a short DVD with a variety of the testimonies along with plans to compile testimonies along certain topics that can be posted on our web site. Along with VC, we are working with Densho with plans to have about twenty selected testimonies on their site which anyone can access. Anyone can currently view or request any of the testimonies at VC. Our main hope is to make the DVDs available and accessible to the public and to educators.

For more information on the CWRIC Collection, please view our finding aid on the Online Archive of California.

Tell us how you made your mark!

How have you raised your voice to be heard?  Email us with your thoughts and photo (if you wish) at history@vconline.org. We’ll post it on the VC Facebook page.

Another one of our finding aids is up on the Online Archive of California! This finding aid describes our collection of testimonies from the Commission on the Wartime Relocation and Internment of Civilians (CWRIC) Hearings held in 1981 in Los Angeles.  In these hearings, former internees, community leaders, and others gave testimony about the impact that internment had on Japanese American individuals, families, and community as a whole. More detailed description, including interviewees and subjects covered, is on the finding aid.

Visual Communications, along with NCRR (Nikkei for Civil Rights and Redress) produced a 12-volume set of the testimonies entitled “Stand Up for Justice.”  Researchers can, however, view the footage in-house for no charge.

Today we remember Senator Daniel Inouye, who passed away yesterday at the age of 88.  He was the most senior member of the U.S. Senator, and served nearly 50 years. He was a World War II veteran from the celebrated 442nd regiment comprised of Japanese American soldiers.  Inouye was highly decorated for his service:  he was conferred the Bronze Star Medal, a Medal of Honor, a Purple Heart, and a host of other awards for his bravery.

VC has an interview with the Senator about his involvement with the redress and reparations movement and his personal experience as a soldier.  You can read an excerpt of that interview on a previous post here. 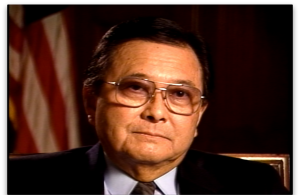 Daniel Inouye screenshot from his interview from the JACL Redress Collection.

Thank you, Senator Inouye, for your service and inspiration to many people– especially Asian Americans.

For more information on Senator Daniel Inouye’s life, please read the statement from his office here.

Everyone knows who the most popular guy is on Facebook.

He’s funny, showcases interesting and funny bits of the internet on his Facebook page, and is an activist for a variety of causes, including gay marriage.  Another issue close to his heart is the redress for the internment of Japanese Americans during World War II.  As a child, Takei was interned along with his family in Camp Rowher, Arkansas and Tule Lake in Utah.  He currently stars in a musical based on the internment experience titled Allegiance — A New American Musical, which is described as an “epic story of family, love and patriotism set during the Japanese American internment of World War II.”  And did we mention that it’s a musical!?

Takei’s activism is by no means a recent endeavor.  We found some photos of him in our photo holdings at a Vietnam War demonstration.  Thanks to Mike Murase, we have the information behind these photos.  The march had dual purposes– it was partly in reaction to the mainstream activists adopting slogans such as “Bring the Boys Home!” that implied the goal was to save Americans from involvement in the war and to save their lives without addressing the suffering and death and destruction of Vietnamese people. It was also to address racism within the ranks of the anti-war forces.

Anti-Vietnam war march on Wilshire Boulevard toward MacArthur Park in Los Angeles, circa 1970. 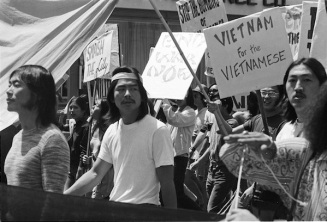 Left to right: George Takei, unknown (please let us know if you know!), and Mike Murase. Circa 1970.

It’s fascinating to hear about celebrities’ “other” lives.  It reminds us that they aren’t just celebrities, but people with many dimensions to them, just like anyone else.

Many thanks to Mike Murase for the background information of these photos!